Only a few kilometres from Vielha and bounded by the forest of La Tuca, the centre of Escunhau is made up of crisscrossing streets, with many stone houses built in the purest Aranese vernacular style.

Of particular interest is the Çò de Perejoan, considered to be one of the oldest houses in the Val d’Aran: built in 1393 it has been declared a Spanish Cultural Heritage Site. The Çò de Perejoan house is located almost exactly in the centre of the village. Visitors to the village can admire the Renaissance windows in the façade, and the keystones of its ancient doorway, which is protected by a loophole, with a heraldic crest from 1393. Below it there are two birds, beak to beak. The house is currently a private residence.

The parish church of Sant Peir, in the Romanesque style of the 11th century, with Gothic element from the 15th and a later bell tower that dates to 16th to the 17th centuries, is a must see. Highlights are the church’s portal and the Crucified Christ on the tympanum.

Escunhau can offer small country guesthouses, apartments and one hotel. The village also boasts some well-known and highly rated traditional restaurants to restore your strength after an active day in the open air. 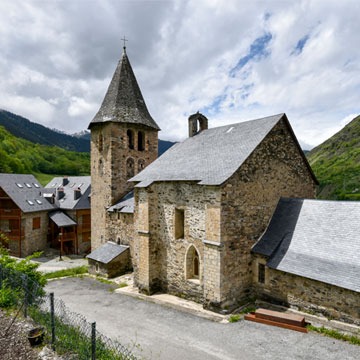 The appeal of the church of Sant Pèir can be found, above all, in architectural and sculptural elements ... 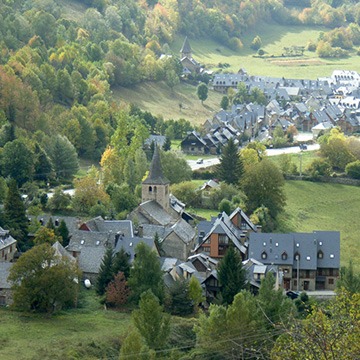 During the summer months don’t miss the chance of a guided visit to the church of Sant Pèir de Escunhau, as, like other churches in the municipality, it is included on the Aran Romanesque Route